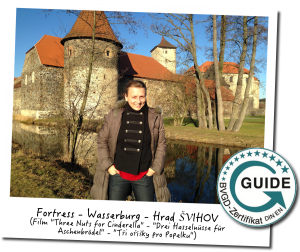 I was born in the capital of Prague, still in former totalitarian Czechoslovakia. My parents fled with me within the first year of my life. After my parents’ escape I’d been growing up in Munich until the age of 12.

The Fall of the Iron Curtain in 1989 made my parents move for new business closer to the Czech-German border in Passau. One year later I moved from Munich to Passau and have been here since 1991.

In Munich I got a four-year long training in a school for translaters and interpreters (for English as first and French as second language) and afterwards I studied in Passau European Studies (majors: English and philosophical studies incl. history, law and economics) and afterwards I studied additionally Media and Communication (media theory, psychology, communication theories).

for this job is my historical, political as well as cultural interest in my home area which is not only the Czech Republic (former Czechoslovakia) but also its neighbour countries Germany, where I have lived almost all my life and Austria, the closest neighbour to Passau in Bavaria/(South-East) Germany.

The beautiful Bavarian Forest (German side) is part of the Bohemian Massif which stretches in a distance of approx. 126 km along all three countries:

is to explain to my guests beside our transnational fabled forest – with its National Parks on both sides of the Czech-German border – the similarities and differences between our cultures and nations.

for this job is my intercultural and international knowledge I have from my own experiences (stay of almost two months in Key West/Florida, Miami, Atlanta, New York, London/GB, Portugal, Canary Isles, Barcelona/Spain, Andorra, France, Switzerland, Sicily/Italy, Slovakia, Slovenia, Croatia, Hungary, Iran – with the WFTGA). Beside my complete school career in German schools as well as in the university of Passau, I take permanently part in tourist-guide trainings e.g. by:

is to offer you exciting entertainment with from-time-to-time anecdotes based on historical and cultural facts, putting local and regional history into a broader international context connecting with the experiences of my guests on their cruise/tour as well as relating to their home countries they originate from or live in.